Unlike 1D barcodes, 2D (two-dimensional) codes contain information both horizontally and vertically, allowing them to store much more data. For example, a single 2D code can hold up to 3,116 numeric characters or 2,335 alphanumeric characters, compared to the 39 characters that Code 39 can hold.

All 2D codes have built-in error correction, similar to the check digits in some 1D codes, which effectively eliminates misreads. Within a single 2D Data Matrix code, the data is typically encoded three times, which significantly increases the chances the code will be read correctly.

While 1D codes have quiet zones and guard patterns to identify where the code starts and stops, a 2D code has a quiet zone, a finder pattern, and a clocking pattern. The finder pattern is the L-shaped pattern located around the outside edge of two sides of the 2D code. This is used to ensure proper orientation during decoding. Opposite the finder pattern is the clocking pattern, a series of alternating black and white modules (or cells) that defines how big a single cell is and the size of the code (number of rows and columns) for decoding. The quiet zone is similar to that of 1D barcodes; for 2D codes, however, it must surround the entire code. 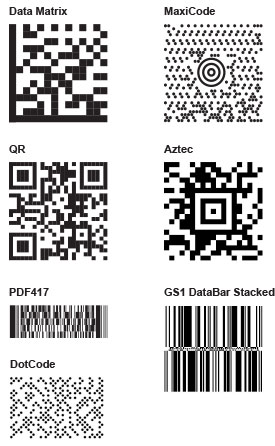