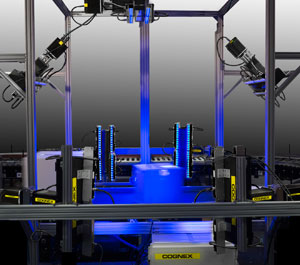 Cognex Corporation (NASDAQ: CGNX) announced the expansion of its award-winning line of image-based barcode readers for logistics, postal, and retail distribution applications with the introduction of the DataMan® 503. With the highest read rates in the industry, performance feedback, and no moving parts, the advanced DataMan 503 is suited for most challenging barcode reading applications and will change the industry’s perception of what can be accomplished with a barcode reader.

“Cognex is leading the rapid technology shift that is occurring in logistics, with distribution centers moving from laser-based scanner and complex line scan technologies to area scan image-based systems. This shift is occurring because customers are realizing the tangible benefits these readers offer,” says Carl Gerst, Business Unit Manager for ID Products. “Cognex barcode readers surpass the limitations of the old technologies and produce read rates that were previously thought to be impossible. Higher read rates reduce manual handling of packages, which means lower costs for our customers.”

Made for challenging logistics applications

The DataMan 503 is a complement to the existing line of DataMan logistics barcode readers and has expanded the number of applications where image-based readers can be used. It is particularly well-suited for applications that have high speeds, wide belt widths, or large variations in package height. Key DataMan 503 applications include:

The DataMan 503 includes all of the DataMan features that have set Cognex barcode readers apart, including:

DataMan products offer the benefits of image-based readers with the ease-of-use and cost of laser scanners. For more information about Cognex DataMan logistics scanners and the DataMan 503 reader, visit cognexlogistics.com.