Machine vision solutions that use laser displacement sensors are composed of three essential elements: a laser line generator, a camera for capturing the reflection of the laser line, and a computer for processing the image and extracting 3D data, and in some cases, 2D images as well. However, laser speckle has long plagued the accuracy of these systems and limited their ability to capture both detailed 3D point cloud models and 2D grayscale images.

A laser displacement sensor works by tracking changes in a projected laser line as products pass through the plane of the laser. When the product passes through the plane, changes in the product’s surface are recorded as changes in the profile. Laser light is particularly well-suited to these 3D scanners because of its fundamental property of coherence. A laser beam will make the thinnest, least divergent line possible and be very bright. And when spread out into a thin sheet of light, like the fan-shaped beam of a laser profiler, the beam projects great distances with a thickness varying by only a few sheets of paper. This behavior comes at a cost, though.

The causes of speckle

The pure wavelength of the laser light allows it to interfere with itself and create random dark and bright spots in the image. This interference appears as grainy “speckle” when looking at a spot created by a laser. Speckle has been accepted as fundamental to laser illumination for 60 years and viewed as a problem in metrology for just as long.

In metrology, the impact of speckle is significant. The random dark and light patches cause a waviness in what should be a straight laser line on a flat part. This waviness, or uncertainty, contributes directly to a random height error that cannot be calibrated out. This is fundamental to laser optics. It is the fundamental limit of accuracy to any laser measurement system, which has afflicted in-line metrology systems for decades.

Engineers try to reduce the impact of speckle on laser triangulation using various methods. Since the basic drivers or variables that can control speckle are wavelength and the aperture of the camera, shifting to a shorter wavelength and a larger-aperture camera can reduce average speckle by 50%. However, the peak-to-valley error is little changed. If your speckled line was a road with potholes, you would have fewer potholes and on average they would be less deep, but eventually, you would still hit several big ones.

Another commonly used method to combat the effect of speckle is to acquire multiple images and average them together. This method removes speckle from the image by the inverse of the square root of the number of images, provided that the speckle patterns have changed enough by motion or some other means. The resulting image would naturally average spatial features, while also requiring significant amounts of time and processing overhead.

Two classic techniques used in laser holography reduce or nearly eliminate speckle by moving the laser, or moving a diffuser between the laser and the screen being illuminated. This does reduce speckle significantly, but moving heavy things — in this case, anything that weighs at least a few grams — limits camera integration times to many milliseconds, and many measurements require a few 10s of microseconds. Also, diffusers destroy the beam quality, making a thin sheet of light impossible.

The promise of speckle-free machine vision for factory automation 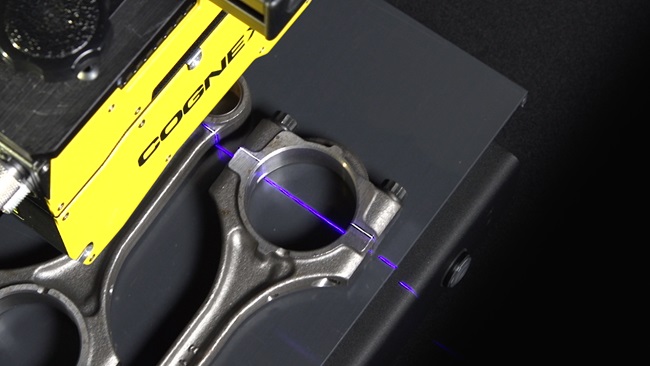 The In-Sight 3D-L4000 approach begins with a 450 nm blue laser steered by a microelectromechanical (MEM) mirror that sweeps the beam back and forth at 26 kHz toward a special diffuser optic. This solid-state optical element has the unique property of diffusing the laser light in one direction in a perfectly uniform fan, while maintaining a “sheet thickness” equivalent to an undiffused laser beam and robustness common to monolithic semiconductor beam-steering solutions.

Furthermore, the intensity distribution along the line is uniform. A field lens concentrates the laser fan, and there is no significant light loss compared to more traditional laser-line generators. Together, these two optical elements generate a laser line on the object that, once reflected back to the sensor, eliminates speckle while maintaining the laser’s brightness. Unlike mechanical systems that try to mitigate the effect of speckle, the new speckle-free laser eliminates causes of speckle at the source. This eliminates both the shallow and deep potholes along the path to developing a successful 3D laser scanning inspection system.

Finally, since the laser line is projected from thousands of different points along the multipart optic it hardens the device against contaminants that might block the laser projector. This projection method has an additional benefit of being safe for the operator. The In-Sight 3D-L4000 laser sources are classified as 2M rather than 3B or 3R, significantly lowering required safety equipment, engineering resources, and deployment costs.

The high-laser intensity aimed at the product generates a higher signal-to-noise value than any other “reduced speckle” 3D laser profiling solution. This enables the systems to run on average faster than the best competing solution with individual frame acquisition times as low as 26 us. Reduced speckle also means higher spatial resolution, resulting in more accurate 3D measurements. As an additional benefit, the crispness and brightness of the laser line and speed of acquisition means that high-resolution 2D grayscale and 3D volumetric images can be generated from the same solution, adding significant capability while reducing costs.